The impact of Ebola goes beyond the thousands of lives lost to the disease. It is also about the suffering of survivors, the hardships of families and the effects of the disease on entire societies.

The social and economic impact of Ebola will be felt long after the outbreak has ended in West Africa. The affected countries face a long road to recovery and the immediate needs are significant.

The outbreak has affected virtually every economic sector in Guinea, Liberia and Sierra Leone. Private investment and trade have been severely depressed. There has been widespread loss of jobs and livelihoods. The outbreak must not lead to a further reversal of hard-fought development gains in the affected countries.  The international community must come together to enable the people and Governments of Liberia, Sierra Leone and Guinea to end the outbreak while laying the strongest possible foundations for a full recovery, the strengthening of essential services, and for longer term development.

Response and recovery efforts must happen in tandem. Recovery and response need to reinforce each other, without continued progress in the response, recovery efforts will not be sustainable. The assets from the response, such as new and refurbished infrastructure, ambulances, and medical equipment, human resources and the skills can – in due time – be channelled into recovery.

The negative impact of the outbreak – on economies, livelihoods and more importantly lives – demands that the global community continues to prioritize recovery from the Ebola outbreak.

On 17 April 2015, in Washington D.C., the Presidents of Guinea, Liberia and Sierra Leone presented their national recovery plan for the next 12 to 18 months at the World Bank Group’s High-Level Meeting “Ebola, the Road to Recovery”. The plans lay out what is required to help communities get back on track and start overcoming the pervasive effects of the outbreak.

The Secretary-General held an International Ebola Recovery Conference on 10 July 2015 to help the affected countries and communities garner support for the concrete and successful implementation of these plans. At the conference $3.4 billion of new funds were announced. It took the total resources made available for the recovery of the Ebola-affected countries to $5.2 billion. These resources will ensure that the building blocks of sustainable recovery are put in place. Long-term recovery will require significant funding, as well as the sustained commitment of the international community and the UN system to support the national recovery plans of the three most affected countries and the Mano River Union.

Subsequently, the African Union convened an International Conference on Africa's Fight against Ebola on 20 July 2015 in the capital city of Equatorial Guinea, Malabo. 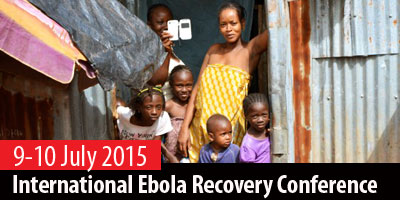